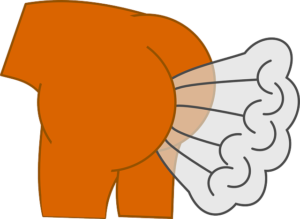 Thermal imaging technology has proven its usage in a wide variety of applications and industries over the past decades.

While thermal imaging cameras work by detecting heat energy from living and non-living objects, including those that are invisible to the human eyes —

One frequently asked question is:

Can thermal camera catch you farting?

Youtube has several uploaded videos that show thermal imaging cameras have caught people farting, even in public places like airport.

In case you haven’t watched such video clips before, below are 4 of them with most views, and we intentionally leave the thermal fart video with the highest (over 6.4 million) views towards the end of this post — for a specific reason.

Tons of viewer comments have been made, debating whether the farts captured by thermal imaging camera shown in these videos are real or fake. What do you think?


The person who uploaded this video claimed a thermal imaging camera caught this man passing gas at an airport.

Mehdi Sadaghdar of ElectroBOOM used the popular Seek Thermal Camera for smartphone – one of the lowest cost thermal imaging camera available on the market today – as part of the “thermal fart” assessment and has his say in the video below:


Interesting analysis, including his analogy by comparing it with hot air emitted from hair dryer.

And here is another video that shows similar outcome, that hot air from hair dryer can’t really be detected by the Seek thermal imaging camera.

Perhaps a different thermal imaging camera brand/model with better resolution and capability can capture the heat signature of fart?

But an experiment by Ethan Berlin shows that even a high-end FLIR E6 thermal camera failed to really catch the farts.

FLIR E6 is indeed one of the best handheld thermal imaging camera available on the market today, a top notch option. Its price? See below… Whoa!

You Believe In This Most-Viewed YouTube Video That Shows Thermal Camera Caught Fart?

Well, below is the most-viewed video that shows fart caught on thermal camera, in case you haven’t watched it before.

… unfortunately some people think this video is real, when the following video description was simply overlooked:

The description of this video states very clearly: “This was shot on FLIR thermal camera. Every thermal footage is authentic, only farts are edited digitally.”


What do you think? Leave comments and share your thoughts!