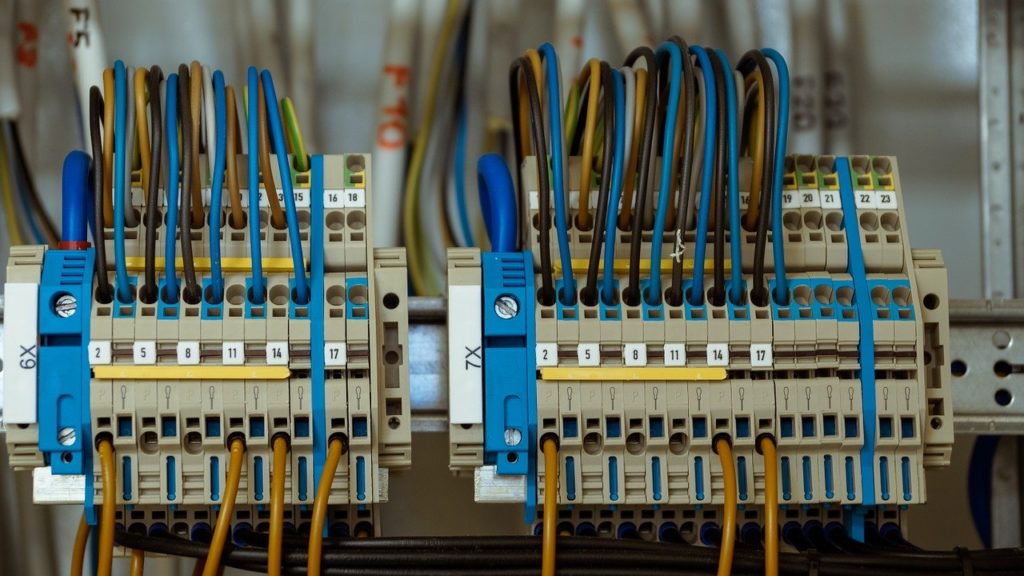 Based on the statistics released by the National Fire Protection Association:

An estimated 44,880 U.S. home fires involving electrical failure or malfunction were reported each year in 2012-2016, caused 440 civilian deaths and 1,250 civilian injuries yearly, and $1.3 billion in direct property damage per year.

A key way to detect electrical conditions that could eventually lead to a fire is to utilize thermal imaging camera to identify defective breakers and switches, load balance issues, excessive loads, corroded or loose connections, etc –

with examples as shown in the following 15 video case studies on electrical panel wiring and hot spot inspection with thermal imager.

The electrical control and maintenance room is one of the most sensitive places that need to be accessed regularly to ascertain the extent of its safety.

To do the inspection on your electrical panel, you can just hold the thermal camera over and closer to the wiring panel.

Those hotspots showing bright colors suggest that you need to further investigate, replace or do some repairs as depicted in the video below:

Electrical energy can be lost through faulty connections and improper maintenance. It is with that very reason that one needs to detect that electrical energy loss in form of heat, however that detection is not possible with bare eyes.

Using a thermal imaging camera, you actually detect electrical heat loss that may suggest that there is a power quality problems and even bad insulation.

This has been extensively shown in the following webinar, which covers how to identify faults and abnormal electrical energy losses in electrical equipment such as breakers, motors, cables, transformers, fuses, etc.

Small wires from an electric circuit board may also emit heat, basically because of a loose connection or an improper circuit board.

When this happens, don’t strain trying to look for faulty wire on the circuit board, just use a infrared thermal imaging camera.

The video below shows the details and findings of an infrared electrical test case study on 15 amp circuit breaker that has a 17 amp load applied to it for 8 minutes, followed by another test at 19 amps that subsequently tripped the circuit breaker in 3 minutes.

A bad circuit will show that there is an extraordinary heat being emitted from the faulty electrical circuit. From here you can either repair or change it with a completely different one.

Taking the following case study for instance, thermal imager was used to troubleshoot a bad circuit breaker which was not coating the aluminum wiring with antioxidiant goop:

A small issue with electrical wiring could bring a huge company to a stop and a company might lose thousands of dollars. Admissibly, making sure that every part of the company runs smoothly is dependent on proper electrical wiring.

you’ll understand the reason why high performing maintenance team love to utilize thermal cameras to find the hotspots before the whole system fails.

Using a thermal camera, it is also possible to identify some of the inefficient micro-solar panels, as shown by Steve in the video below.

Hold your thermal camera over your solar panels and then move it over the surface. Amazingly, there are those panels that shows a high degree of heat.

With that idea one would conclude that your solar panels are losing heat that could have otherwise been converted into electrical energy and transferred to the battery.

From a small domestic solar system, to huge electric circuit panel in an industry –

a thermal imaging should be regularly done just to check if there are hotspots in the circuit boards, cables, and the circuit breakers.

Here is another example that shows thermal imaging camera offers features essential to everyday use by electricians for thermal surveys to identify and locate faults as early detection of improper connections and defective components:

Considering faulty electrical circuits are very dangerous, it is important to regularly inspect all your circuits and find out whether they are still intact or no.

In order to avoid heat loss and electric energy wastage, an infrared electrical inspection needs to be done. That is the only efficient way to identify faults in your electrical wiring.

Generally, there are 2 different types of thermal imaging camera for electrical inspection:

First is a thermal camera that can be plugged into your Android & iOS smart phone or tablets.

The another type is hand-held and works independently without the aid of a smart phone.

The latter becomes handy in those places that your smart phones may not be allowed, while the more powerful thermal imaging camera with higher specifications are currently only available in handheld design.

In both case, the procedure is the same where you need to make sure that the camera faces the electrical unit.

It is very impossible to detect whether a circuit breaker is overloaded or not, because they don’t complain until when you just realize that they are burnt.

One needs to regularly check if there is an electric overload that results to overheating of the electrical circuit breakers. To do that, you need to minimize the number of plugs in sockets.

The video below shows thermal imaging camera like FLIR ONE can quickly detect electrical overload and problematic areas in a breaker box:

It is important to find a hot circuit breaker using an infrared camera.

It this video, an inspection by a Dallas Home Inspector found that there was a circuit breaker that was so hot that it was almost reaching its yielding point.

Remember, a faulty circuit breaker will start heating and overheating before snapping and causing problems.

Do you have an old house with old circuit or wiring in it?

With thermal imager, it is possible to scan all the old cables in a house. It is only then that you will realize that some of them are red while some can be light red down to dark in color.

The red hot image in the case study below suggests that such a cable is not the best and needs replacement or re-wiring.

#13: Another Electrical Inspection with Thermal Imager

A newly installed circuit board may or may not have faults.

What is the source of faults in a newly installed circuit breaker panel?

Issues may arise due to two causes:

The first one is loose wiring and improper connections; The second one is bad conductors.

To do a thorough inspection, make use of a thermal camera as demonstrated here:

The advantages of infrared thermal imaging is that it is efficient. That is in the sense that you can easily identify a faulty electrical panel wires or cables.

It also shows the severity of the problem, with the redder color reflects the more serious the issue is, and that will tell you that you need to act quickly.

Here is another case study:

In this video, Chris Mercredi used a SEEK thermal camera to look around his basement.

It was detected that his electrical panel had hot spots –

with the first hot spot in the video is a small transformer for Wifi router, while the second shot is GFCI breaker which appears to be running hot.