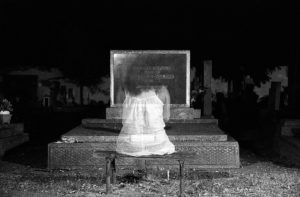 The supernatural is the natural not yet understood, says Elbert Hubbard.

While places like Pennhurst Asylum and Ohio State Reformatory are popular haunted locations that attract visitors, the existence of spirits is often debatable.

If you like paranormal hunting, you’re probably aware that thermal camera is fast gaining popularity as a ghost adventure gadget and professional paranormal investigation equipment.

How to Catch Ghosts and Spirits on Thermal Camera

Infrared thermal imaging camera is capable of detecting tiny temperature differences of living/non-living objects, including in environments without any light – such as haunted cemetery that is surrounded by total darkness at night.

Thermal camera collects infrared radiation from objects in the scene to create an electronic image that can be displayed on screen, captured as photo, or recorded as video.

But you may be wondering:

Great For iOS and Android

After a successful iOS version, FLIR ONE was launched for Android phones as well. As a pocket size accessory that transforms an iOS or android device to a powerful thermal infrared camera capable of visualizing heat —

The FLIR ONE thermal image camera attachment allows users to attach this small device to their smartphones or tablets, and offers them non-contact temperature measurement ability.

The latest generation of FLIR ONE has ditched the traditional case design that was specific for particular phones, to a universal design that can be attached to android device via its charging port like a dongle.

FLIR ONE has two versions: One for iOS, and the other with a micro USB connector for android devices. It has its own battery so it does not drain the phone’s battery when it is plugged in. The battery is charged with its own micro-USB port. All smartphones or tablets that support the FLIR app would be able to use this device.

FLIR ONE shows temperature in Fahrenheit as well as degree Celsius scale. Its operating temperature ranges from 32°F to 95°F, with the ability to detect small temperature differences up to 0.18°F and displays the temperature at the center of the screen.

This thermal camera can capture images and videos. It also has a mechanical shutter behind the glass, which opens up when being used. Other prominent features include Panorama, TimeLapse, Paint, and CloseUp functions. Battery capacity of FLIR ONE is 350 mAh.

One is a thermal camera and the other is a visible light camera that outlines a subject to give you a better idea of what is being looked at. The camera combines image with heat sensor.

To use FLIR ONE, it is turned on by holding the power button and is then plugged into the phone. The FLIR ONE app is then launched and infra-red heat display can be seen.

MichaelDMagee used FLIR ONE thermal imaging camera for ghost hunting, and shared his experience in the video below.

It can also be used to make homes more energy efficient to see where heat and cold are escaping, to observe the kinds of energy losses in the house and detect any other electrical issues that result in overheated appliances.

Thermal cameras cost thousands of dollars but FLIR ONE can be bought for a very reasonable price for everyday use.

You can check out >> the latest price and user reviews of FLIR ONE here.

It also comes with a carrying case since the sensor is pretty sensitive, so you don’t need to worry about it getting scratched or broken and can be easily carried in pocket without worrying about damaging it. While this product is great, one drawback is its relatively low thermal resolution at 80 x 60 (i.e. 4,800 pixels).

By the way, here is the interesting “Flir ONE – Haunted House” video in case you missed it:

Seek Thermal Compact Imager is another accessory that converts a smart phone into a thermal imaging camera. It can see up to a thousand feet away with a 36 degree field of view.

Its detectable temperature range is from –40 to 626 degrees Fahrenheit, while it also works for Kelvin and Celsius scales. Temperature readings are really accurate with a 1 degree error at most. The results are equally good for day and night as well.

in which you can see over 1,000+ user reviews here on how they used this thermal camera.

Seek makes the camera compatible with the iOS and Android smartphones with a simple and user friendly app, alongside several different modes including viewing image in black and white. Its app also allows users to view different colors, single point of reading, highest and lowest value and a threshold mode which shows temperature above or below specific points.

One mode enables user to view both the camera of Seek Thermal Compact Imager as well as the camera of the smart phone. It splits the screen into two. As thermal imaging makes it difficult to recognize the objects in the image, here the split screen can play a useful role.


This thermal camera has also been used for ghost hunting and paranormal investigation, such as the video below that shows some paranormal activity footages in a house and hotel.

Seek Thermal Compact Imager has a micro USB plug coming out of it as well as a small lens. It gets attached to the bottom of the phone via micro USB port. The whole thing can fit in the palm of our hand. The unit comes in a water proof carrying case.

Before this and FLIR ONE, the only way to get access a thermal imaging device required spending thousand dollars but now with a gadget like this Seek camera, our work can be done in a much more affordable manner.

With Seek Thermal Compact Imager is one of the cheapest thermal imaging camera available on the market today, this is indeed the least expensive thermal camera that you can add on to your ghost hunting arsenal.

…then you can consider the popular FLIR C2 thermal camera.

With FLIR is one of the most established brand in thermal imaging industry, it is no surprise that FLIR thermal cameras are popular choice of paranormal investigators and ghost hunters.

For example, below is a paranormal investigation video by Robert of Austin Paranormal Research, a quick daytime check at the Haunted Lake House using FLIR thermal imaging camera, with his youtube video description as below:

.. believe I captured a couple of spirits. Although pareidolia is always a concern the FLIR never presented man shaped images anywhere but in the kitchen – a hot spot for spirit activity.

EVPs were captured that not only confirmed spirits were present but they warned other spirits to “get down” at the site of the camera and did so angrily. After the warning no images were seen again. Then numerous spirits complained that what I’m doing is awful. They do NOT want to be filmed.

FLIR C2 is powered by the MSX Multi-Spectral Dynamic Imaging enhancement which combines the digital and thermal images into one detailed image — ensuring there is no loss of data which is usually associated with thermal infusion.


The following video gives an overview of all the FLIR C2 key features that you need to know, including its auto-orientation function and how to easily operate its menu with touch screen.

It is also coupled with a high sensitivity to temperature differences of less than 0.10°C. these specifications ensure you receive very accurate readings and the ability to detect most subtle differences in temperature.


Powered by a rechargeable lithium-ion battery that lasts for up to 4 hours, this compact and durable camera has a tough housing with a sleek finish, and it is designed to last for many years can be used in any type of situation.

FLIR C2 is able to shoot JPEG images which store large amounts of radiometric information. This ability is useful since you do not have to convert the images in order to share them, and they can easily be analyzed with the FLIR Tools professional reporting software that is included in the C2 purchase.


The video below comprehensively goes through the features and menu of this popular FLIR C2 thermal camera, alongside some tests that have been conducted.

You can also check out >> the latest price and user reviews of FLIR C2 here.

What Color Is a Ghost on a Thermal Camera?

Thermal camera detects then displays relative differences in the intensities of the infrared energy being emitted from an object of a series of other objects. Warmer object will emit more infrared energy.

If a ghost is caught on thermal camera, the spirit that is invisible to the human naked eyes will leave a heat signature and show up as a bright/warm spot or dark/cold spot in relation to the surrounding temperature and environment.

Consider getting a thermal imaging camera and let the advanced technology to give you the edge and night vision you need.

Watch the video below… Fact or fiction? You decide.