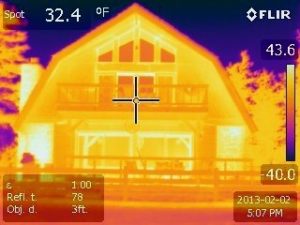 With each era of history is known by some kind of innovations and scientific discoveries, the 19th century is famous for the uncovering of invisible light waves like gamma rays, radio waves, and so on.

When knowledge is combined with hard work, inventions come into being which is exactly how FLIR thermal imaging became part of many daily lives, from military and law enforcement to casual use by consumers.

Deciding on one good value FLIR thermal camera for home inspection can be quite a daunting task, especially when this biggest name in the market of infrared imaging has been manufacturing thermal imaging solutions since 1978 that cover huge variety of applications.

In case you are in a rush, here are the recommendations:

Let’s jump right in to review through each of these FLIR thermal imagers.


FLIR ONE is a thermal imager that allows you to peak into the invisible world of infrared rays using your smart phone and tablet.

You just need to plug this camera device onto the Micro USB port of Android device or the lighting port of iOS device to start observe the heat signals around you.

Check out user reviews of Flir One >> here.

Flir One comes with two built in cameras – Thermal Imager and Visual Light Imager. The thermal imager uses the infrared ways of long wavelengths to capture the heat signals around you, while the visual light camera works simultaneously with the thermal imager and provides you with an overlay. The overlay allows you identify the object in the picture.

Flir has been in the thermal business since 1978 thus the company’s engineers have designed both a credible hardware and software. The hardware is nothing without the software which is why the Flir has designed compatible apps for both android and IOS separately to provide you with solid experience.

The application is user friendly and offers a wide range of color palettes that you can use to uncover some tricks. The colors are assigned according to the number of heath signals detected from the source object.

The default palette of the Flir One thermal imager ranges from dark blue to bright yellow or white. The hottest objects are colored yellow while the coolest ones are colored blue.

Watch the following video from certified home inspector Tom Munro, and see how does FLIR ONE work for home inspection.

The FLIR ONE device itself is very sleek and fancy, despite it is one of the cheapest thermal imaging camera available on the market. The company manufactures two models, one for IOS devices and the other for Android devices.

Both the models are the same except that the IOS model can rotate in all directions while the Android model is fixed in the direction of the USB port. Other than a on and off switch with a LED light there is nothing on the device.

It comes with a lanyard hung carrying clip that allows you capture the heath signals in the wilderness. The device has its own rechargeable battery that last for only an hour.

Since the successful launch of Flir One Compact Thermal Imager, the company has since then introduced the Flir One PRO with 2 key enhanced features and specifications:

Check out the Flir One PRO video review below, and hear out what the users say about it.

The Flir One thermal camera can be used for various purposes. It depends entirely on your needs. Some individuals just use it for the fun purpose while others use it for something beneficial. You can capture both still and moving images with the help of the unit.

Some of the uses of the thermal imager include: Viewing people hiding in the bushes, figure out broken wires in the wiring system, trace footsteps, and so on.

Of course, Flir One PRO can be used for home inspection too, as demostrated by licensed contractor Jason Cameron in this video.

Let’s start by doing a side-to-side comparison on the key specifications of FLIR One/PRO vs FLIR TG165, which is a popular handheld spot thermal imager designed for general use.


The following video video shows a quick comparison of FLIR TG165 vs FLIR One PRO.

So should you consider TG165 thermal imager for home inspection?

Yes, especially if you

You can see what the users say >> here for you to make an educated decision.


The Flir TG165 Spot thermal imager is the first ever imaging IR thermometer. The other thermal cameras manufactured by the company focus mainly on the thermal imaging and not the thermal thermometer which is why the TG165 has made its name.

If you like technical stuff, the brief video below gives a clear overview of TG165 hardware design, and how does it compare to the FLIR ONE and a traditional spot thermometer.

For example, if you point the TG165 at an electrical panel, the thermal imager will tell you where the hot spots are, whereas the thermometer will indicate the temperature measurement reading of the hot spots and how much they are hotter than the other points on the panel. An electrician can then take off the panel for inspection to figure out why it’s so hot.


Comes with the new Lepton micro thermal sensor that provides an 80 x 60 pixels resolution, the TG165 manifested by FLIR has many built-in features along with variations in the overall design and specs.

As a durable thermal imager that can withstand a 2-meter drop, TG165 has 2.0″ LCD display with a wide 50° Field of View. It is handy, intuitive to operate, and it can detect hot spots for electrical, HVAC and mechanical upkeep with temperature measurement range from -13 degrees F to 716 degrees F.

The images and data can easily be saved into the 8GB micro SD card that comes together with TG165 thermal imager, and the images/data can be downloaded fast over USB from the removable micro SD or with the included USB cable.

The following video gives a great overview and demo of this FLIR TG165 thermal imager.

The device comes with only two color palettes which is a drawback, but most users usually focus on the point where it is very user friendly as no training is required in order to access the device. With a comfortable grip and the water resistant feature, this thermal imaging device is perfect for both indoor and outdoor uses.

You can check out the latest price of FLIR TG165 thermal imager >> here.

then this entry model of the FLIR E-Series thermal cameras is definitely a top choice, because E4 is simply the FLIR’s most affordable professional thermal imaging camera.

While it has the marks of acceptance with its compliance and certifications of UL, CSA, CE, PSE and CCC — it is also meeting various environmental/EMC standards including RoHs, WEEE, C-Tick, IP-54, and much more.


The video below shows the different specifications of FLIR Ex-series thermal cam, starting from the lowest configuration of E4 — up to E6 then E8.

If you have the budget, you can consider E8 as the most powerful among the FLIR E-Series devices, because it has the highest resolution and thermal sensitivity.

However, the price of FLIR E8 thermal camera is nearly tripled of E4.

FLIR E4 works by monitoring the heat signals emitted from the objects that they are focused at. The device comes with a built in electron absorber that measures the amount of IR rays emitted by the object.

It can capture infrared, visual and MSX images. The FLIR Multi-Spectral Dynamic Imaging (MSX) system built in the device measures numbers, characters, texture and all the other relevant data relating the object and helps you compare various thermal and digital images to detect the issue.


The FLIR E4 thermal imaging camera can be used for various purposes. With the help of the advancing thermal technology, you can solve thermal related issues before they get worse.

For example, you can use this device to observe the thermal problems in your water pipes and electric panels. The E4 features also makes it capable for identifying energy loss, intrusion by moisture, overheating and structural issues.

Check out the video below and see how did a home inspector used FLIR E4 to do a thorough inspection on a new house, and explained the problem areas of missing insulation and low energy efficiency in this new property.

This thermal imaging camera with 3-inch colour LCD screen gives you an quality image display by using various color palettes. The colors differ from hot to cold, with the hottest spot is yellow while the coldest spot in the image is display in blue.

The device is very easy to handle. No training is required prior to the use.

Just turn the device on and point it at various devices to measure the intensity of heat signals emitted from them. The camera allows you capture images with a single click. The images can be viewed on the camera later or can be sent to the PC to edit them with FLIR software.

Watch the following video and see how did Les Wilhelm perform DIY home energy audit with FLIR E4 thermal camera, and found interesting things that were invisible to naked eyes.

Purchase of FLIR E-series thermal imaging camera has 2 years coverage on parts and labor, 5 years on the battery, and 10 years warranty on the detector as the most vital part of the entire thermal camera.

This thermal imaging camera comes with a wide range of accessories such as USB cable, transportation case, rechargeable battery and a charger.

FLIR E-series are equipped with MSX Technology feature that is not included in TG165, while the E-series have a larger 3-inch LCD screen.

TG165 has slight advantage on its thermal accuracy and battery life, as shown below.

Depending on your usage and budget, these 3 thermal imagers offer excellent value to meet your needs, including house inspection.