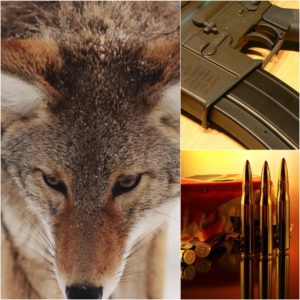 While the most common reason for killing coyotes is to reduce predation of livestock like calves, coyote hunting remains a controversy between advocates and hunters, including petition launched to end coyote control and hunting contests in Vermont.

Still, about 500,000 coyotes are killed in the United States yearly, according to statistics revealed by National Geographic.

Among the best coyote hunting gear is AR-15 that can be effective, especially when setup in a .223 caliber that makes up for quick follow up shots.

We’ve handpicked some best related videos and put them together in this resource guide:

WARNING: These videos may get you excited and cause you to have an itch to grab your rifle and head to coyote hunting hotspot straight away.

Brandon Dolbeare and pal took a cool shot to take down a coyote at 60 yards on a windy and cold evening!

Other equipment used include LWRCi Six8A5 12.7″ suppressed with the Gemtech ONE 7.62 suppressor, and Armasight Zeus 75mm HD 640 thermal imaging scope.

Jason and BgBamBoo used their .223 to hunt coyote in the morning.

A great video by Coyote Assassins, with Joel Williams and Rusty went into the deep desert of Nevada for some awesome coyote actions!

If coyote shooting by adult hunters is nothing special –

then how about an one shot kill by a 6 years old kid?

Watch how did Alpha Dog Down made use of sun in his setup to make a clean shot on the coyote!

Gus Congemi shot down the 34 pounds male eastern coyote with his AR15 .223

Like to hunt coyote by taking the advantage of using thermal imaging technology?

You’ll like this compilation of thermal coyote kill shots.

Want some coyote hunting tips and tactics for hunting timber?

Alpha Dog Down showed you the way in this video.

Antler Addicts went to the woods and used AR-15 for predator hunting in South Texas.

#16: Hunting down a Predator

thaHooligan shot down a coyote with his AR15.

#19: Coyote Hunting In The Dark (Behind the Scenes)

#21: The Follow-Up Shot – Why You Should Use an AR for Predator Hunting

It’s a real world that you don’t always get a clean shot.

So what if you missed?

Fred Eichler shows you the great follow up shot within 2 seconds, and that’s why he loves his Rock River Arms AR for coyote hunting.

Chase Wininger and Scot Coyote who were hunting coyote in Kentucky, used a Primos Alpha Dogg to call and mojo critter as decoy.

Dan Blaney shot a coyote on film by himself, using a Bushmaster AR-15 223 with a Nikon Coyote Special BDC scope and the Remington full metal jacket.

#25:: Hunting with an AR for Color Phase Coyotes

Jon Collins in Kentucky had 2 great coyote hunts with pal, including an awesome color phase coyote!

Video footage on a predator hunt in the foothills of Virginia.

A coyote double at 300 yards with custom AR-15 204 Ruger, and ATN Thor as one of the best thermal rifle scope for coyote hunting.

Andy DelliVener found a taker for his DWO Signature Series call, when a dark easter coyote came into the field.

Carpe Sus called in an coyote from nearly 300 yards and watched it with his IR Hunter MKIII thermal sight before parting a killing shot.

Nadia, Parker, and Zach went for back-to-back morning hunts with .223 and the results didn’t disappoint.

Check out these videos!

Still not sure if AR-15 is suitable for hunting?

Check out the excellent video below by Buffalo’s Outdoors.

Yes, at least delmont223 thinks so, and he shares his experience in the video below.

Jake of Flatlined Predators did a comprehensive AR-15 review in this video.

Great question, hear him out.

David Herring elaborated on some of the best coyote hunting rifle calibers in this video.

3 guys from Hidden Instinct go through their favorite calibers for coyote hunting.

Tom Fuller goes through some key factors that you should consider when selecting optics for your AR-15.

Indeed, he has the following updated youtube video, comparing 10 different calibers for AR-15. While the audio quality is not that good, you can still check it out as it has good info.

BushyBoyz gave an overview of his Colt AR15 setup for coyotes.

See how CalebToutdoors setup his AR15 and improved its accuracy for coyote hunting.

This video from 704 TACTICAL gave an overview of some common AR problems and how to fix them.

You definitely don’t want to miss these 3 excellent videos by Michael Bell, and then keep them for your future reference!

Nick and Jesse talked about their AR-15 Sling setups in video below.

What if you don’t have the money to buy a ton of different ARs?

A good talk by the MidWestOutdoorsMan.

The hunttomuch wolfe guy found some ways to make his rifles blind in when hunting.

Watch how he did it:

In video below, RedEyed Jack gave a comprehensive guide on how to convert an “assault rifle” into a modern hunting rifle.

This video from the West Desert Shooter can give you ideas on how to upgrade your AR-15 rifle (within tight budget) to make it more suited for long range shooting.

He elaborated where money is best spent on a long range system for a DMR, SPR, SAPR rifle.

The video below gave an overview of universal all around 0-500 rifle concept and rifle build, followed by caliber and accessories for AR-15.

especially the .223 vs .308 test by DemolitionRanch on which caliber is the best!

In video below, MIM94 compared some different factory available ammo’s for the one caliber.

He cooled down the barrel between each group shot, then ditched the outlier cold bore shot when measuring the grouping.

Blake Myers of Southern Extreme TV shares his opinion on what type of ammo that is best for coyote hunting.

A very interesting video from tnoutdoors9.

Fantastic .223 vs .308 testing video from DemolitionRanch!

Which caliber is the WINNER? Check this out.

This video by 44Firearms explains the difference between the Remington .223 and the 5.56 rounds, including comparison between both cartridges of ammunition.

And which rounds to use for which rifles? How to avoid loading the wrong ammo?

AndrewSails1371 reviewed a few different types of Ammo for AR 15.

#62: Deadliest and Best Coyote Shotgun Load and ChokeTube For Coyotes!

Excellent video by Les Johnson who shares his vast coyotes hunting experience, and he received over 2.1K Youtube Likes for this!

We believe you can surely pick up a thing or two from these excellent recommendations!

Blake Myers shares his insights on what you need to get started coyote hunting, and some gears that you will want to add to your coyote hunting arsenal.

The Shoot To Kill Outdoors guy elaborates on his choice of rifles and gears.

Excellent comprehensive video by Clay Owens that you don’t want to miss.

Mark Kayser talks about the most common and effective coyote calls to use when you are coyote hunting.

MFK GameCalls demonstrates how to locate coyotes and calling them into shotgun range, when and why to move on coyotes.

Especially useful for coyotes hunting in the thick and timbered terrain of southeastern U.S.!

#70. Shooting Tips – What’s the Best Time to Shoot a Coyote? Where To Shoot A Coyote?

Good advice in this video.

By the way, in case you are wondering “where to shoot a coyote?”:

For beginners, you have a bigger target if you aim the chest area, but it could create a longer death. Take it to the head is an option, however it’s a small hard-to-hit area that a coyote can be injured due to hunter’s misplaced shot to the brain and the animal may suffer before dying.

All responsible and ethical hunters strive for quick clean kill shot, with the most effective shots are delivered to an animal’s vital organs of heart and lungs.

As explained in this article, placing the shot through the front shoulder provides a quick clean kill, as the heart and lungs are tucked in right behind the shoulder joint on a coyote.

Watch Ross shares how he sets up on his stand to help him put more fur on the ground.

A good video by Informed Outdoors outlining the 7 rookie mistakes that beginners made.

#73. When To Go Coyote Hunt and Start Predator Season?

Blake Myers walks you through when you should start coyote hunting during the year.

A short but important video for beginner hunters.

The videos above are too basic for you?

#77. How To Get Coyotes Close: Coyote Shot 10ft From Call

With the help of a call, decoy, and some Conquest Scent –

Fred Eichler shot a Colorado coyote within 10 feet of his Fox Pro call.

#78. Trapping Bait and Lures for Coyotes

Video from ilive2h on some tested and proven trapping bait and lures for coyotes.

When a running shot is all you have, Fred Eichler has some tips to make that shot count.

The Hidden Instinct guy gives his tips on how to plan your call route around the weather to increase your success rate.

Jon Collins share the tips during his spring time coyote hunt in Kentucky!

When Les Johnson reveals his tips for calling coyotes in all seasons, you surely don’t want to miss this video!

Another great video packed with predator calling tips and advice.

Informative video that compares the differences of Night Vision vs Thermal Imaging.

#87. Hunting with Night Vision and Thermal Imaging | 9 Coyotes Among Casualties

Al Voth explains how to monitor your scent cone at ground level by using a “wind string”.

Check out this tip to avoid getting winded by wary coyotes.

#89. Great Questions – Can You Kill Too Many Coyotes!

Did you enjoy watching these videos? Which of the above is your favorite?